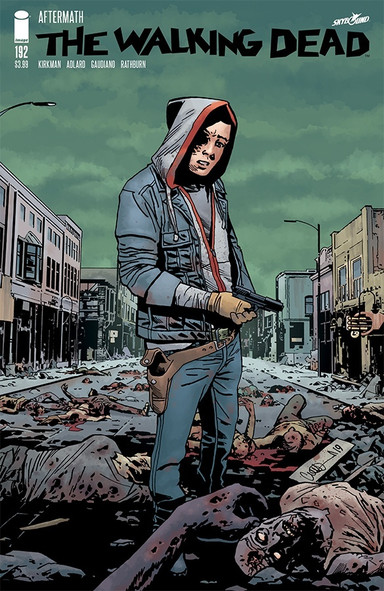 In light of the recent shocking/not-so-shocking events of TWD #192 by Robert Kirkman, Charlie Adlard and Stefano Guadiano, there’s been some commentary out there by TWD fans that the death of series main protagonist Rick Grimes at this stage in the long-running comics series that also has a long-running adapted TV show series (with its own recent but different fate of the character) is less impactful than it maybe could have been.

My personal commentary on this is that I would have to agree that his demise in the comic having coming after his disappearance (but not actual death) on the show diminishes the impact a bit. On one hand you have to allow the comic to exist as its own thing, yet on the other, whether preferred or not, there is the reality that the comic series does not exist in a vacuum, that it does exist in delayed-tandem with the TV show (and a forthcoming trilogy of TV movies soon). I think Kirkman’s letter in the backpages of this issue lays it all out quite well. This event was, he claims, a long time coming and some fans agree it’s been inevitable all long these 15 years or so, but I can also agree this event probably should have happened a little sooner in those black, white and gray-tone pages if it was going to happen at all.

Also, announced/revealed not long after #192 was available in stores — and with no regard for spoiling the issue’s major event — was this: