As comic book fans — and by natural extension, comic book movie fans — we tend to get a bit passionate about prospective and rumored casting of roles as well as the actual official casting. And in these times of ultra-successful comic-adapted superhero action movies, plenty of actors come out of the woodwork stating a desire to play a superhero in any of the plenty of upcoming movies.

Most recently news came out that SUPERNATURAL’s Jared Padalecki has always wanted to play DC Comics’s NIGHTWING character. As this reveal made its way throughout comics media, the blogosphere and social media, fans began to debate the validity of Padalecki’s candidacy as a prospective Nightwing. Some agreed he could truly be a good fit and that he certainly has ‘the look’. Others disagreed, citing his age (currently 34) in relation to a likely mid-20s Dick Grayson alter ego. To that regard even I contented that Padalecki could easily play a character 10 years younger provided he’s clean-shaven.

And then a few days later, well today, I came to realize this: it should probably be mentioned that nowadays saying actors are “too old” for a specific acting role may not be as viable an objection as it used to be. Today they have the digital visual effects technology to remarkably de-age actors’ faces (see Robert Downey Jr. aka young Tony Stark in CAPTAIN AMERICA: CIVIL WAR) as well as reanimate a dead actor from the grave (see Peter Cushing aka Grand Moff Tarkin in STAR WARS: ROGUE ONE). 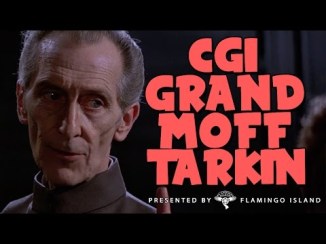 SIDENOTE: Or age the actors, even! See Diane Lane in MAN OF STEEL.

So moving forward, so long as they get the “right” person for the part, living or dead, it’s all good. It’s a new day, my friends. Scary and awesome at the same time.