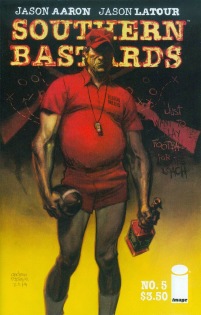 Southern Bastards #5 (Image) – Well…I guess I’m out. Fuck. I’m pissed off. Just like Game of Thrones with Ned Stark, my gateway character – in the case of this series, Earl Tubb, the sympathetic protagonist of the “Here Was a Man” story arc (a telling title), the apparent star of this series’ first four issues, actually *** RARE SPOILERS *** diedin that fourth issue (okay, so “died” is a bit of an understatement, considering). Meaning he wasn’t even in this issue; hell even at his funeral it was a closed casket (y’know, given that hellacious beating he took in #4…). As of now, I’m undecided on getting #6. Maybe after the shock wears off, I’ll come around. But I don’t know. This dramatically changes the story for me – it’s less about one man and his awful plight and more about Craw County, its rival neighboring counties and all the bad denizens that live (and die) there. Minus one Earl Tubb, the whole reason I bought into the series. Damn you Jasons Aaron & Latour! Sigh. – Rating: 4.0