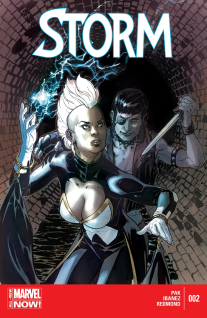 So this issue was good and I would say better than #1. It opens with a classic Claremontian-styled scene between Ororo and Logan. Logan and Hank’s guest appearances feel so classic, Greg Pak seems to have recalled the spirit of middle era Uncanny X-Men. This would fit so well in mid-1980s UXM in tone. Pak seems to be writing this like he’s been handed a new character for a new audience, and that’s not a bad thing. It works. Each issue so far has been self-contained, and I will only nitpick that they almost have the feel of a TV episode where things wrap up neatly by the end, all nice and pat. But that’s how they did it in the old school “compressed storytelling” days of the Golden and Silver Ages, and if I’m honest, that’s what I’ve been advocating for over at Marvel — less decompressed storytelling. If only they’d apply some of this to their marquee titles, especially the team books.
I give this issue a 4.0